I wanted to write this post as baby led weaning is something we did ourselves with our little one.

Although I sometimes found the experience a little scary (there’s a lot of gagging going on at the beginning), it’s a weaning method I would now recommend as we have a little boy who is confident feeding himself.

He eats a wide variety of foods and doesn’t seem too fussy (the only thing he hasn’t seemed to like so far were my homemade falafels – I don’t know why, I liked them)

And he has developed great fine motor skills from all the pinching and grasping of his food.

By the end of this post you’ll have a better understanding of what baby led weaning and how it compares to traditional weaning.

You’ll also be able be well informed about the scientific research regarding the pros and cons of baby led weaning and hopefully be able to decide if it’s right for you.

What is baby led weaning?

According to Sellen and Smay (2001), weaning is the process whereby a child moves from a diet of only breastmilk to a diet completely comprised of solid foods. The period in between called complementary feeding (where the child eats both solid food or purees and breastmilk).

Traditionally, the weaning method advised to most mothers in western countries was to spoon feed their babies a selection of pureed foods and baby rices (starting at around 4 months) for a time before moving on to mashed foods then solids.

The World Health Organisation now suggests to start spoon feeding your baby directly at 6 months and gradually increase the consistency and type of food you feed them.

Baby led weaning, a term coined by Gill Rapley, is an alternative form of weaning whereby you skip the pureed foods part and go straight to solid finger foods at around 6 months.

It has a focus on the child feeding themselves with the family all sitting down together to eat healthy meals that have been prepared so that they are suitable for everyone.

The move to solid foods rather than pureed at six months seems to be backed up by a recent report in which the Scientific Advisory Committee on Nutrition (SACN) recommended breastfeeding exclusively up to the age of 6 months.

After which, parents should introduce a wide variety of solid foods, alongside breastfeeding, with varied textures and flavours.

In the recent paper Baby-led weaning: Where are we now?, Rapley states that baby led weaning ‘is an overarching approach to the transition from milk feeding to family meals that recognises and respects the infant’s instincts, abilities and desire for autonomy.’

This autonomy means that the child has the ability to listen to what their own appetite is telling them and decide what and how much they’d like to eat.

Rapley goes on to write that baby led weaning allows the child to start eating foods when they are developmentally ready. For example, when they are able to sit upright and pick up things and move them to their mouth.

Research has shown that it is normal for a baby to be able to do perform these actions at around 6 months old.

Baby led weaning encourages exploration of food and can incorporate a period of time (could be as long as a few weeks) where the child is just allowed to feel and play with the food before actually eating it.

This handling of food may allow the child to have an idea of how the food will behave when they actually do put it in their mouth.

The child is encouraged to try a wide variety of different foods and this along with repeated tastings of food has been found to increase children’s development of food preference.

Milk feeding is meant to run alongside baby led weaning. It should be up to the child when they decide they want feeds and when they are ready to reduce the number of feeds they are having.

Our Experience of Baby Led Weaning

Our experience with baby led weaning started with my little sister. She had a baby about 3 years ago now and followed the baby led weaning method with her. She reported really positive things and now my little niece is a really good and non-fussy eater.

After listening to her explain how great she found it and watching my niece eating so confidently and independently we decided to give it a go when our little one (who was born just over a year ago now) was ready.

This was when he was just under 6 months.

He took to it straight away. There wasn’t a ‘playing around with the food’ period for us. He shoved it in!

At first I found the whole thing pretty scary. He still seemed so small and here he was sitting upright in his highchair on his own, cramming carefully cut pieces of solid food into his mouth.

And there was a lot of gagging at the beginning.

He would go completely silent and a bit red and it seemed like he stopped breathing for a few seconds before ‘bleugh’, he brought the food that he was struggling with back up into his mouth to have another go at.

There was also a fair amount of coughing but we’d read that this was OK as it meant that air was able to pass through his throat and it was just another way that he used to help move the food from his throat.

I was surprised at how good he was at picking up food and moving it into his mouth – for a baby that is (he wasn’t as good as me and I let him know that often). When you think about it there are a lot of skills involved.

He needed to have good spatial awareness to be able to know where the food was in relation to himself.

He needed to have reasonable hand eye coordination and gross motor skills to be able to move his arm in the correct way and fine motor skills to grasp the food and pick it up.

He was a bit shaky at times and his movements were nowhere near as deliberate and focused as they are now but then he has had a lot of practise since then.

As frightening as I found his initial encounters with food, he soon got the hang of it and the frequency of the gagging incidences reduced (it’s very, very rare these days). He ate a lot of different foods, basically whatever we were having – made with no salt/sugar and cut so that he could pick it up and not choke on it.

I guess because he was introduced to lots of different foods early he will eat almost anything (except the falafels I mentioned earlier!). We never have an issue getting him into his high chair and when we put food in front of him he rarely ever rejects it.

I really believe baby led weaning has helped with his fine motor skills – although I don’t have anything to compare it to – but when we took him to nursery for the first time they commented on how good he was at feeding himself and they always report back that he’s eaten all his meals.

He’s only just one and has been able to feed himself with a spoon for a while now although his fingers are still his preferred tool of choice. All that practise has got to have helped.

Looking back now, I would regard our baby led weaning experience so far as a positive one, both for us and him. I love that we can all eat the same thing (it saves us time not having to make purees and presumably money) and that we all sit down together to do it. I can sit down next to him and apart from keeping his tray stocked and offering him water every now and again I can leave him to it and enjoy my own meal.

One thing I would comment on though is the mess. I don’t know how it compares to traditional weaning but I’d guess that as you have more control with that and are feeding your child with a spoon it has to be worse. We bought a sheet to go under his high chair (a dog would have been better) and this has reduced the amount of mopping but we still need to get the dustpan and brush out after every meal.

My own anecdotal observations aside, let’s look at the research and see what the professionals think.

What are the benefits of baby led weaning?

What are the disadvantages of baby led weaning?

What can you do now?

If you do decide to go ahead with baby led weaning this is the book we used, its written by and based on Rapley’s research and was useful in getting to understand the process.

There is also now a plethora of resources online and plenty of healthy, high-iron, low-salt, low-sugar recipes available (I may share some of our favourites in future post – who knows?).

We also found Facebook a great resource as there are lots of weaning groups (probably one based in or around your area) where you can speak to people who have actually done it/are doing it at the moment. We found these were full of great advice and recipes.

It’s ultimately up to you as a parent to decide what to do. Only do what you feel comfortable with – I can recommend it as a weaning method but understand that it isn’t for everyone. If you have concerns I advise doing lots of research and speaking to a professional about which weaning method is right for you (I am definitely not a professional).

I will say though, as it can be a scary process, one of the things that made me more confident with baby led weaning was, due to my job in a school, that I had a first aid training.

I think it’s great to have first aid knowledge regardless of which weaning method you try as it really could help your child one day but, honestly, those first few feeds were a bit hairy and knowing that I knew what to do if he did choke gave me piece of mind.

I didn’t know about baby led weaning in the way you are talking about. We just started with the traditional way of giving my daughter pureed foods, then mashed foods, and then solids. I can imagine it would be frightening at first when doing it the other way. It’s interesting, though, that this method resulted in a less fussy/picky eater!

My sister raved about it so we gave it a go. I hadn’t heard about it either before.

It was very scary at times but I’d definitely do it again!

Do you Want some Free Printables?

Get full access to over 150 pages of educational printables and activities with more added each week.

You can easily download and print them at home to help nurture those neurons!

I hate spam and you can unsubscribe at any time, I won’t hold it against you – well, maybe a little… 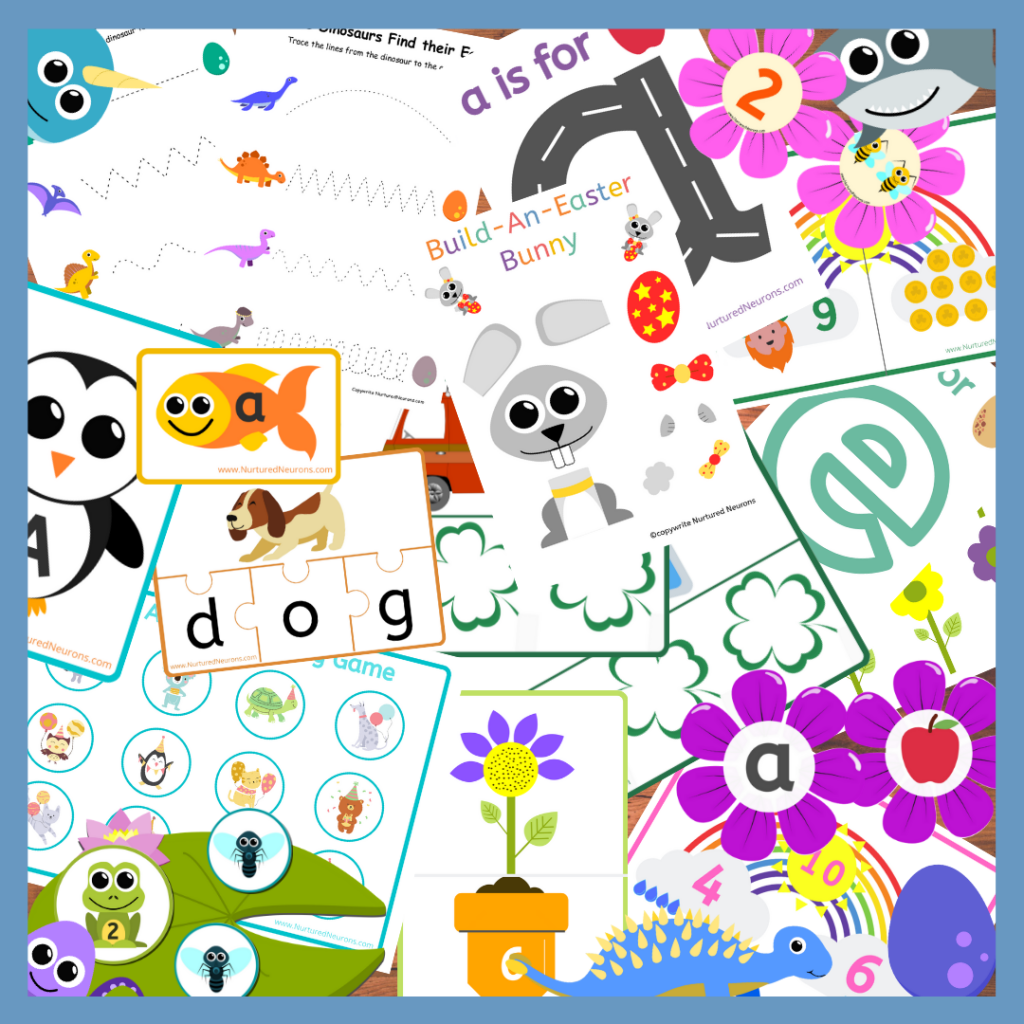